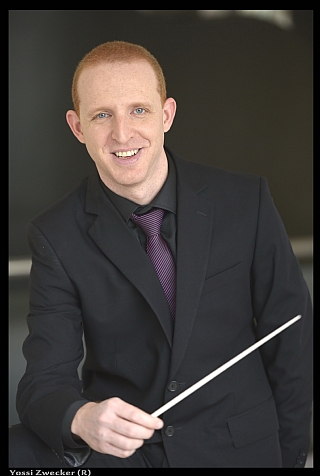 Ethan Schmeisser was born in Israel. He graduated cum laude from the conducting program at the Tel Aviv Music Academy and completed his second degree under the guidance of the late Mendi Rodan. He is the Head of Music and the Chorus Master of the Israeli Opera. He is the music director, conductor and pianist for many Israeli Opera programs including the Saturday of Gold opera concerts series. He has received the AICF scholarships. He has conducted the Israel Chamber Orchestra, the Raanana Symphonette Orchestra, the Israel Sinfonietta Beer Sheva, the Jerusalem Symphony Orchestra IBA and other orchestras in Israel. He has worked as a harpsichordist and pianist for productions of the Israel Philharmonic Orchestra, the Israel Symphony Orchestra Rishon LeZion, the New Israeli Vocal Ensemble, the Ramat Gan Chamber Choir and others. He has played the recitatives in Il barbiere di Siviglia (Rossini) with the Israel Philharmonic Orchestra and Cosi Fan Tutte (Mozart) with the Israel Camerata Jerusalem. He has founded the Bononcini Ensemble and Venice female voice ensemble with whom he performed in many concerts. At the Israeli Opera he conducted the world premiere of Flying Lessons (Milech Sheriff) in a joint production with Cameri Theatre. He has conducted the family production of Die Zauberflöte (Mozart) which he arranged for piano and wind quintet.

At the Israeli Opera he conducted: